After extolling the wisdom of God’s Word in the previous section of Psalm 119, David made a decision to follow it. It was settled — he was determined to live according to God’s ways and words. 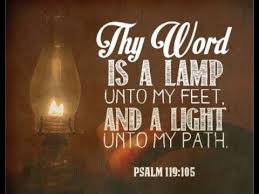 Verse 105
Your word is a lamp to my feet and a light to my path.
David thought of God’s word as light to help him see things he wouldn’t otherwise be able to see. Jerusalem didn’t have street lights in David’s day. If people ventured out at night, they carried a lantern to illuminate their path, helping them avoid open sewers or horse poop on the road. The lamp didn’t serve as a guide as much as it provided a way to keep from stumbling into the muck. This lamplight only was effective for the person who was up and moving on the path, not for the the one who was sitting on the couch wishing for direction. As Thomas Manton said, “It is not a light to our brains to fill us with empty notions, but a light to our feet to regulate our practice and to guide our actions.”

Verse 106
I have sworn an oath and confirmed it, to keep your righteous rules.
David had made a promise to carry the light of God’s Word throughout his course of life. That was a good move, but he knew he had to revisit that decision often and recommit himself to it regularly. Why did he swear on a stack of Bibles to stick with God? Because he knew himself — he could be stubborn, fickle and lazy. And he had a thing for beautiful women. Still, it was good to make a vow, even though he didn’t have the strength within himself to keep it perfectly. Paul prayed for New Testament believers with this idea in mind: “We pray for God’s power to help you do all the good things that you hope to do and that your faith makes you want to do.” (2 Thess. 1:11)

Verse 107
I am severely afflicted; give me life, O Lord, according to your word!
This determination to keep God’s righteous rules wasn’t based on an arrogant view of his own strength. As soon as he swore to live by God’s standards, he pled for God to give him grace to keep that promise. Affliction may have driven David to confirm his resolve. It’s hard to stay true when going through seasons of severe testing. “We need to remember that the Christian life always ends well, but it doesn’t always go well.” (Stephen Yuille) An initial decision to follow Jesus, especially when made publicly, helps us stay on course during difficult times that may come down the road.

Verse 108
Accept my freewill offerings of praise, O Lord, and teach me your rules.
There’s nothing more powerful that genuine, heart-felt praise in the face of severe affliction. David offered praise, not because he felt obligated or under constraint, but because he wanted to, of his own free will. He meant it. The word “freewill” implies a spontaneous and abundant outpouring from his mouth. In other words, he spoke his praise out loud, even while beset with troubles. His offering of praise was not required by Old Testament law and had nothing to do with payment for sin. It just bubbled up from a heart of love for his Lord. Once again, David humbly asked for continued instruction.

Verse 109
I hold my life in my hand continually, but I do not forget your law.
Evidently, David’s decision to commit himself to God was fraught with danger on a daily basis. That is still true today for believers in many parts of the world. Whether we are aware of it or not, there are always evil forces working against any believer’s resolve to follow righteousness. The life of faith is something we have to continually fight for. Even so, David kept God’s law in the forefront of his thinking. “While he carried his life in his hand, he also carried the law in his heart.” (Spurgeon)

Verse 110
The wicked have laid a snare for me, but I do not stray from your precepts.
Traps had been set to trip David up and take him down. Snares are tricky — they are hidden from view and meant to catch or entangle something unawares. No wonder David felt like he was being hunted; every move he made was risky. For the second time in two verses, David used my favorite word in the Bible — but. No matter what, David would not abandon God’s law or wander away from God’s truth.

Verse 111
Your testimonies are my heritage forever, for they are the joy of my heart.
In light of the daily pressure of snares and affliction, David turned his thoughts to eternity. He needed some joy, so he pinned his happiness on the everlasting nature of God’s word. He relished the thought of a “forever” where every promise would be fulfilled and peaceful joy would reign. He was able to get a taste of that joy by affirming his future inheritance.

Verse 112
I incline my heart to perform your statutes forever, to the end.
Back in verse 36, David wrote, “Incline my heart to your testimonies.” He was asking God to help him “stretch toward” and “lean in” to God’s word. Seventy-six verses later, David was taking hold of his heart and telling it where to lean. He took the long view and then reconfirmed his intention to stick it out to the end. To infinity and beyond. 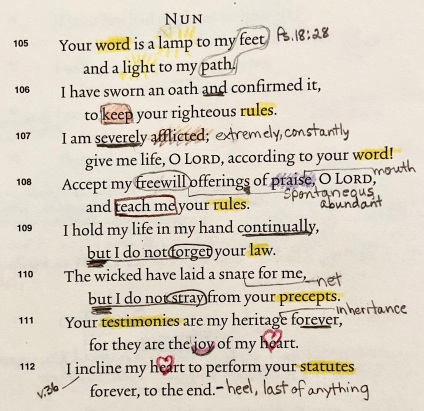 Things I know for sure from this passage: