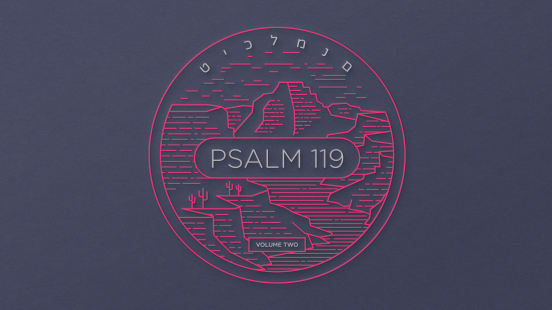 Verse 81
My soul longs for your salvation; I hope in your word.
There’s a lot of longing in this section of Psalm 119. It is definitely the low point, or as Spurgeon said, “the midnight of the psalm.” David was not just wishing for better days; he had worn himself out with yearning for a rescue, even to the point of fainting. His struggle had gone on for so long, that his spiritual strength was faltering. So David lamented. He honestly expressed his anguish and asked the questions we all wrestle with when experiencing periods of suffering: When? How long? Why? As in verses 43 and 74, David’s hope came from the word of God. Paul wrote, “But if we hope for what we do not yet have, we wait for it patiently.” (Romans 8:25) David was running out of patience.

Verse 82
My eyes long for your promise; I ask, “When will you comfort me?”
David could read the words of God’s promise and he believed them, but he couldn’t see them working on his behalf.  Time was ticking away and nothing seemed to be happening. For the first time in his long song, he asked questions. God’s comfort was something he had experienced many times in the past, but what about now? David was saying, “If You’re not going to save me right now, can’t You at least comfort me? Like, right now?” Instead of asking, “When will you deliver me?” David’s question revealed what he truly desired: God’s reassuring presence with him.

Verse 83
For I have become like a wineskin in the smoke, yet I have not forgotten your statutes.
You probably don’t have an animal skin full of wine hanging in your chimney. It was common in David’s day, as the smoke added flavor and mellowed the new wine. However, if the heat became too intense or if the wineskin was left too long, the skin would dry and crack, ruining the contents. David felt he was coming dangerously close to cracking under the heat of persecution. He was burning out during this prolonged time of stress.
True to the biblical form of lament, it didn’t take David long before he turned his mind back to God. Although at the moment he felt as if God had forgotten him, he would not forget God’s statutes.

Verse 84
How long must your servant endure? When will you judge those who persecute me?
Almost immediately though, the questions returned. Like David, we ask, “How much longer until this is over? On what date and time will You come through for me? If I knew when this trouble is going to pass, I would be able to gut it out.” But God does not often let us in on His timetable. Faithfulness and perseverance matter more to God than worldly success and ease.
Did you notice that something is missing in this verse? There are no “word” words here: law, word, precept, statute, commandment, etc. This is one of only five verses in the entire psalm that doesn’t refer to God’s word. Perhaps lingering too long on the questions fostered doubt and crowded out the Word.

Verse 85
The insolent have dug pitfalls for me; they do not live according to your law.
David wasn’t just whining about minor offenses. He had legitimate enemies that were trying to take him out. He couldn’t reason with them about their malicious attacks because they had no basis for morality, living apart from God’s law. David was dealing with cruel and crafty deceivers who were intent on causing the kingdom and the king to fail. He had to watch his step, knowing land mines were everywhere, waiting to blow him up.

Verse 86
All your commandments are sure; they persecute me with falsehood; help me!
In contrast to the pits that caused fear with every step, David reminded himself of the sure foundation and solid footing of God’s truth. Even so, he was near the end of his rope. His reputation was being sullied by a smear campaign based on lies. Things were spiraling down so David desperately prayed, “Help me.” It wasn’t the first time. “When I said, ‘My foot is slipping,’ your unfailing love, Lord, supported me.” Ps. 94:18

Verse 87
They have almost made an end of me on earth, but I have not forsaken your precepts.
If this was it — if this was the way it was going to end for David — then his days on earth would be over, but it wouldn’t be his final chapter. David kept the promise of eternal life before him. He also knew “the grass withers and the flowers fall, but the word of our God endures forever.” (Is. 40:8) He hung on with incredible tenacity to the words of God, knowing he would take them with him into eternity. In troubling times, the Bible should be the one thing we cling to above all else. We can’t quit reading, memorizing, studying and meditating on God’s Word in times of hardship. It shouldn’t be the last resort. (Did you notice that big “but”?)

Verse 88
In your steadfast love give me life, that I may keep the testimonies of your mouth.
There it is again — that “hesed” love: “steadfast love, lovingkindness, mercy, unfailing love, faithful love, loyal love; a long-suffering love that extends to the undeserving and even intervenes on their behalf”. David wasn’t eager to see the curtain come down on his time on earth. He wanted to live. Why? So he could clear his name? Or get his popularity back? Or see his persecutors judged? No! It wasn’t about him at all! David wanted to live so that he could make God’s name great, so that he could display the steadfastness of God’s character, and so that the Words of God could be exalted!

Things I know for sure from this passage:

The Exodus Music recording of this section of Psalm 119 is especially beautiful. I’m a sucker for a cello accompaniment. You can feel the ache in David’s lament – take a listen!