2. I choose paint color based on how good it sounds to eat. Warm Caramel won out over Hot Mustard Seed and Water Chestnut. Mmmmm. Warm Caramel.

3. My word for February was “yield”, as in: to surrender or submit. As in, I don’t always need to be right. As in, sometimes other people have better ideas. As in, it’s ok to not get my way. This screensaver on my iphone kept reminding me. 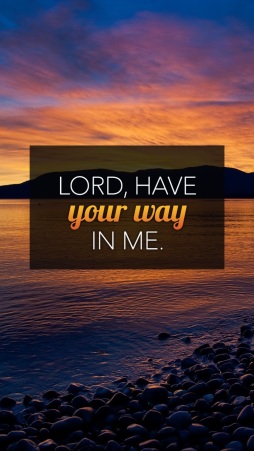 4. Visitors in church one Sunday morning turned out to be the grown children of a pastor that served our church from 1977-1990. They were thrilled to be invited over to the parsonage and to walk through the home where they grew up. It was fun hearing all their stories and memories from their years here. They were particularly pleased to see the same drapes hanging in the living room. They sure don’t make curtains like they did 40 years ago.

5. When I saw Tom Brady hoist up the Lombardi Trophy after winning the Superbowl, I couldn’t help but think of something he said after he won his third championship. “Why do I have three Superbowl rings and still think there is something greater out there for me? A lot of people would say, ‘This is what it is. I reached my goal, my dream.’ Me? I think, ‘God, it’s got to be more than this. I mean, this isn’t what it’s all cracked up to be.'” I hope he’s still asking that question.

6. Quote of the month: “Christians should be the most refreshingly unoffendable people on a planet that seems to spin on an axis of offense.” Brant Hansen

7. A successful ministry doesn’t always look successful by this world’s standards. Our women’s Bible study finished eight weeks on J the B (John the Baptist). We learned that a call to ministry and complete faithfulness to that calling can still result with your head on a platter. This world doesn’t always reward greatness, by God’s standards.

9. Babies come when they’re ready. We are waiting for a phone call announcing a new grandchild. It appears Little Miss wants to be in the March photo collage on next year’s family calendar.

10. PB is longsuffering. He has put up with two solid weeks of my hacking and coughing and sniffing and sneezing. Never once did he suggest I take my germs and ruckus out to the couch so he could get a good night’s sleep. We promised “for better or worse”. He held to his end of the bargain this month.

3 thoughts on “10 Things I Learned in February”