Tav is the twenty-second and final letter in the Hebrew alphabet. Tav (also written as “Taw”) has the same sound as “t” as in “tall”. Every line in Psalm 119:169-176 starts with this letter. Tav looks like this:

The word Tav means “mark” or “seal” or “sign”. In the earliest Hebrew script, the letter tav was the shape of a cross, much like our English letter “t”. 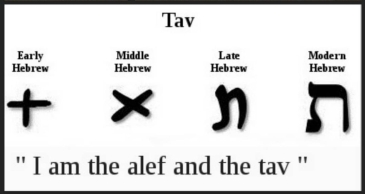 The last letter of the Aleph-Bet reveals Jesus in a powerful way. The first letter, “Aleph”, showed the God-man who came to be a bridge between heaven and earth. That bridge came in the shape of a cross, or “tav”. Jesus’ death on a cross was foreshadowed in the letters of the Hebrew alphabet. He is the Alpha and Omega, the Aleph and Tav.

When Aleph-Tav is seen together in one word in Hebrew scripture, it’s like a verification signature or seal of the Author. It appears in significant places in the Bible, but because it is not translatable, it is overlooked in our English translations. But the combination of Aleph-Tav is all over the Old Testament, about 7,000 times! The combination of the two letters is even found in the very first verse of the Bible, Genesis 1:1. The message of Jesus’ coming to earth and His death on the cross is embedded in the dawn of creation!

The word “tav” can be found in Ezekiel 9:4, where God put a mark (tav) on the foreheads of the people who opposed the worship of idols. The death angel was told, “Do not come near anyone who has the mark.” This same idea is in Revelation 22:4, “They will see his face, and his name will be on their foreheads.” Some believe that mark will be the Hebrew letters Aleph and Tav.

Tav also stands for “truth”.
The Hebrew word for truth is “emet” which is spelled
Aleph (The Creator)
+
Mem (gives His life)
+
Tav (on the cross).

The gospel is also easily seen in the word “Torah”,
which is spelled
Tav (the cross)
+
Vav (the nail)
+
Resh (the Captain, or Leader)
+
Hey (Behold!).

Next: My favorite word in the Bible that starts with Y.