Lamed (also written as Lamedh) is the twelfth letter in the Hebrew alphabet. Lamed has the same sound as “l” as in “lake”. Every line in Psalm 119:89-96 starts with this letter. Lamed looks like this: 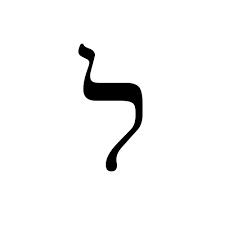 “Lamed” is unique in the Hebrew alphabet because it is the tallest letter.

Also, it is considered the central letter, or “heart” of the Hebrew alphabet.
By the way, the Hebrew word for “heart” starts with the letter “lamed”.

The word “lamed” means to learn or to teach and it is first seen in the Bible in Deuteronomy 4:1, “Now, Israel, hear the decrees and laws I am about to teach you.” Learning has always been viewed as sacred to the Jewish people. It was a high calling for a man to become a Rabbi because it meant devoting his whole life to learning the Torah and teaching it to others. Every student’s goal was to move from knowledge to understanding to wisdom. Knowledge alone came up short without moving from the head to the heart. The wisest Rabbis were seen as head and shoulders above everyone else, just like the “lamed” rises above the other Hebrew letters.

In the Jewish tradition, learning wasn’t an end in itself, but found its purpose in action. The accumulation of knowledge was only of value if it spurred one to do something. James, Jesus’ brother, wrote about this idea in his letter.

“But be ye doers of the word,
and not hearers only,
deceiving your own selves.”
(James 1:22)

A true disciple, then, is both a learner and a doer,
one who “learns” in order to “do.”
Sometimes we need a little prodding to “learn” and “do”.
The “lamed” is shaped like a cattle prod,
which farmers used to direct their animals.
A little poke, a kick in the behind, or a spur in the side
motivates us to keep moving along.

Even though Jesus was a Teacher while He lived on earth, He also was a learner. “Son though he was, he learned obedience from what he suffered.” Heb. 5:8

The name Israel starts with the smallest letter, “yod”, and ends with the biggest letter, “lamed”. Some scholars interpret this to mean that the nation of Israel may have started out small, but in the Last Days it will be higher than all the other nations, teaching them the truth about God and Jesus, the Messiah.

The first eleven letters of the Hebrew alphabet revealed the gospel. The second set of eleven letters will reflect the response of a believer and the walk of faith. It all starts with learning, being teachable, and recognizing the prodding of the Holy Spirit. Next: My favorite word in the Bible that starts with “M”.