Heth (also written as Chet, Khet and Het) is the eighth letter in the Hebrew alphabet. Heth has the same sound as “kh” as in “Bach”. It makes a gutteral sound, similar to clearing the throat. Every line in Psalm 119:57-64 starts with this letter. Heth looks like this:

The first seven letters of the Hebrew alphabet introduce the story of the Gospel: The God-Man (Aleph — Jesus) came to earth to be master of the house (Bet) and to give the good gift of redemption (Gimel) to the poor and weak (Dalet). The Holy Spirit breath of life (He) came and connected God and man at the cross (Vav). Jesus overcame death and ascended to His throne where He rules and reigns (Zayin). Whew!

Heth begins a new series of seven letters which explains the walk of faith. How appropriate that the word “Heth” means “new beginnings” and “life”.

In the broadway musical “Fiddler on the Roof”, there is a celebration scene where all the men toast the engagement of Tevye’s daughter to Lazar Wolf. They sing,

Chaim means life.
The word “chai” is a Hebrew symbol, often worn in jewelry.
It signifies new life — or resurrection life, for believers in Yeshua. 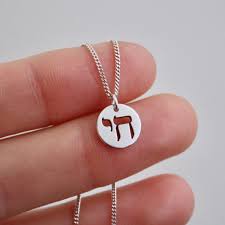 “…they (wisdom and discernment) will be life for you,
an ornament to grace your neck.”
Proverbs 3:22

The shape of the letter Heth represents the doorposts and lintel that the Hebrews covered with the blood of a lamb at Passover (Exodus 12:7). Because of that act of obedience, the people were delivered from slavery in Egypt. The chains of bondage were broken and they entered into a new life of freedom.

Rabbis also teach that the Heth is a combination of Vav (representing man, who was created on the 6th day) and Zayin (the crowned Jesus, our King of Kings). The two letters are connected by a “yoke” across the top, picturing our relationship to the Lord as He leads and teaches us on our walk of faith. Jesus said, “Take my yoke upon you and learn from me.” (Matt. 11:29) Heth!!

Because Heth is the eighth letter, there are several biblical connections:

Which verses in the “Heth” section of Psalm 119 speak to you about ways you need to stay yoked to Jesus in your walk of faith?

Next: My favorite word in the Bible that starts with H.

One thought on “Heth”