Don’t get excited when you see the “Z” at the beginning of this letter.
We’re not even near the end of the Hebrew alphabet, my friends.
The journey from Aleph to Taw is rich with reward for those who endure!

Zayin is the seventh letter in the Hebrew alphabet. Zayin has the same sound as “z” as in “zoo”. Every line in Psalm 119:49-56 starts with this letter. Zayin looks like this: 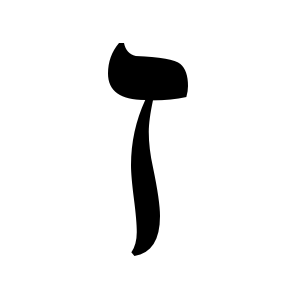 In the words of Jewish sages,
“All sevens are dear.”

It is no coincidence, then, that there is a seven tone scale — do, re, mi, fa, so, la, ti. There are seven colors in the rainbow and there are seven openings in our heads.

Oy veh.
I could go on and on, but that’s a blog post for another day.
Suffice it to say:
because Zayin is the seventh letter, it holds great significance.
For believers in Messiah Jesus, this significance is amplified.

Last week, we learned about the sixth letter “Vav”, which is connected to mankind because Adam was created on the sixth day. Zayin looks a lot like Vav, except it has a crown on its head, so this letter is a picture of a man with a crown. That’s our Jesus.

Zayin is also regarded as an image of a sword with the tip pointed down and the hilt on top. The sword also represents Jesus, our Overcomer, defeating death and sin. Now we have access to the “sword of the Spirit, which is the word of God.” (Eph. 6:17)

The Victor ascends and the sword turns into a royal scepter — “But of the Son he says, ‘Your throne, O God, is forever and ever, the scepter of uprightness is the scepter of your kingdom.'” (Heb. 1:8) King Jesus holds out His scepter to welcome us to the throne. “Let us then approach the throne of grace with confidence.” (Heb. 4:16) 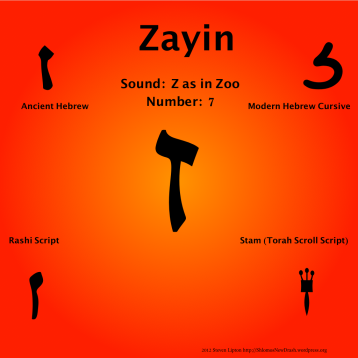 Next: My favorite word in the Bible that starts with “G”.

“Go find yourself a tree, sit down in front of it, look at it long and thoughtfully.” (Eugene Peterson) New year goal: be like a tree. Read more at dinahoverlien.com #asmalldropofink #belikeatree #psalm1 #eugenepetersonquote
Loading Comments...
%d bloggers like this: