He (also written as Hey, Heh, or Hei)  is the fifth letter in the Hebrew alphabet. “He” sounds like “hay” and the letter has the same “h” sound as in “heaven”. Every line in Psalm 119:33-40 starts with this letter. He looks like this: 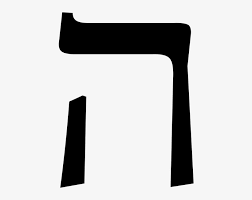 This one is a gem.

You know how it is on a cold day when you exhale and see your breath?
The letter “He” is considered the Divine Breath, the exhale of the Spirit.
“By the word of the Lord were the heavens made,
their starry host by the breath of his mouth.”
Psalm 33:6
God breathed out stars!

A few days later, God sculpted a mud-man and “breathed into his nostrils the breath of life.” (Gen. 2:7) It’s His breath (His “He”) in our lungs and it’s His Spirit (His “He”) in our souls that makes us living beings.

The letter “He” looks a lot like Dalet, but with something added. Jewish Rabbis taught that the arm from Aleph came over to be a part of Dalet, forming a new letter. Since Aleph represents God and Dalet represents broken humanity, what we end up with is a picture of God coming to live in the human heart, by means of the Spirit. “He” is an image of Dalet opening the door of the heart so the Spirit of God can indwell the believer.

Another definition of “He” is “Behold!” It sounds like an overwhelmed sigh, as if suddenly coming upon a panoramic view of a majestic sight. The God-Man (Aleph — Jesus) came to earth to be master of the house (Bet) and to give the good gift of redemption (Gimel) to the poor and weak (Dalet). Behold! (He) John the Baptist chose his words carefully: “Behold! The Lamb of God who takes away the sin of the world!” What an overwhelming, majestic sight! (Did you notice Psalm 119:40? “Behold!”)

God used the letter “He” to change people. Remember what happened to Abram? God renamed him Abraham — God breathed His life-giving Spirit into Abe and changed his name to show it. Sarai became Sarah, because adding the letter “He” at the end of a noun “feminized” it, allowing it to be “fruitful”. God’s announcement to Abraham that Sarai was being changed to Sarah was like a proclamation that she was no longer barren. In fact, it was believed that women needed the “H” sound in their names if they were going to be able to bear children, which gave Hagar a distinct advantage over Sarai. (Rachel didn’t have the letter “He” in her name, but Leah, Bilhah and Zilpah did.)

According to Jewish tradition, the name of God is so holy it should never be written. Hebrew documents today still refer to God as “G-d”. The name of God as revealed in Genesis 1:1 is considered to be so sacred that it is never to be spoken aloud. This hallowed word is made up of four Hebrew letters: Yod, He, Vav, He.

Stay with me now. This is going to be good.

No wonder the chief priests of the Jews protested to Pilate, “Do not write ‘The King of the Jews.'” In other words, “You cannot write the sacred, unutterable name of G-d and attach it to this man for the world to see.” But God’s will was for the world to see and to know that Jesus was and is the King of Kings. And He used an unbelieving Roman governor to carry out His will. The purposes of God cannot be thwarted.

Hallelujah! (That starts with “He”, too!)

Next: My favorite word in the Bible that starts with “E”.

If you need to review:
Aleph
Bet
Gimel
Dalet