Some scholars believe that David wrote this long psalm bit by bit, over the course of his lifetime. In the first section, he saw that there was blessing for those who walked in the ways of the Lord. Perhaps he was looking up to older men who modeled a walk with God. He stated his willingness to learn and his desire to be steadfast. In the second installment, David started by asking a really good question.

Verse 10
“With my whole heart I seek you, let me not wander from your commandments!”
Sometimes we believers get mixed up about what to seek. We attempt to try to live according to a checklist of virtuous behaviors. We set out to be good, seeking some kind of perfection through self-righteousness. David knew he had to set his whole heart on seeking God, not just obedience to His laws, because half-heartedness would result in straying from the Lord. David made it his priority to seek God in the place where He could be found — in the Word.
How do we wander? 1) By neglecting prayer, Bible reading, and corporate worship; 2) By chasing after frivolous entertainment; 3) By indulging in careless thoughts and temptations. The shocking reality is, if we’re not actively seeking God, then we’re wandering from God. We don’t have time to be wanderers.

Verse 11
“I have stored up your word in my heart, that I might not sin against you.”
David may have been young, but he had been taught well. Young Jewish boys memorized large portions of the Torah (the first five books of the Bible), so he had a rich storehouse from which to draw. Notice David didn’t say “I should store up” or “Someday I’ll try to store up”. Nope, he already did, and that was going to help him keep his way pure.

Verse 12
“Blessed are you, O Lord; teach me your statutes!”
Even though he had stored up the words, David needed instruction to be able to understand and follow through on the commands. Simply knowing the law wasn’t enough. He had to learn to love it and live by it.
Ten more times in this long song David asked God to teach him, indicating that he never felt like he knew it all, even as he got older. He stayed teachable.

Verse 13
“With my lips I declare all the rules of your mouth.”
You don’t have to ask me twice to tell you about my grandchildren. Get me started and I will bubble over with delight as I talk about them. We tend to talk the most about the things that are most important to us. For David, that topic was God’s law. It wasn’t something he just thought about — he talked about it. Out loud. With his lips. Our love for God and His Word should be spoken of in a way that attracts others. You’ve probably heard the quote, “Preach the gospel, and if necessary, use words.” Well, I’m sorry folks, but words are necessary. If the Lord is important to us, we won’t be embarrassed to talk about Him.

Verse 14
“In the way of your testimonies I delight as much as in all riches.”
The Bible wasn’t boring to David. It was something he enjoyed with great pleasure. He thought of it as hidden treasure just waiting to be dug up. David wouldn’t trade the richness of God’s Word for a whole pile of money.
Jewish rabbis call Psalm 119 “a love song to Torah” and they actually kiss the scrolls of scripture before and after each reading in the synagogue. “When a human being kisses a leather bound sheaf of paper, the loving essence of the gesture penetrates into the realm of the non-material. The kiss reaches deep, beyond paper and ink, into the meaning of the words in the Torah… The Torah is, so to speak, the lips of God.” (Dr.Michael Chighel)

Verse 15
I will meditate on your precepts and fix my eyes on your ways.”
David concluded this stanza with another set of “I will” statements. Biblical meditation is nothing like the eastern religion type that sits in silence, empties the brain and hums “om”. The word “meditate” means “to converse with yourself out loud; to murmur or mumble to oneself.” If memorizing scripture is like eating it, then meditating is like digesting it, with the goal of internalizing it and letting it transform us from the inside out. “Our hearts are naturally cold, but meditation makes them hot, causing them to boil with love for God and His word.” (J. Stephen Yuille) Meditation increases the pleasure of reading and studying God’s Word and helps us keep our eyes fixed on His ways. 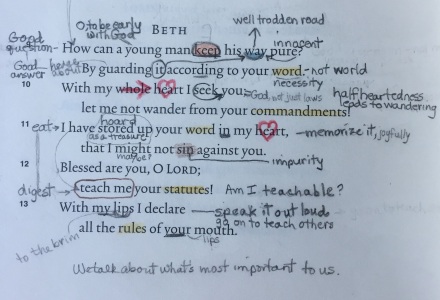 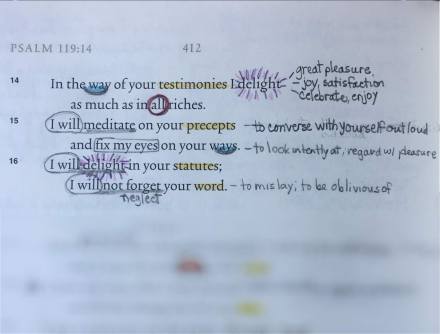 What do we know for sure from this passage?

What do you think?