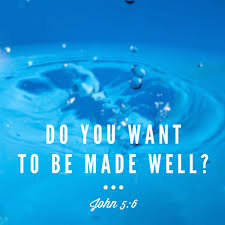 Jesus directed this question to a man
who had been an invalid for 38 years.

That would be like talking to someone today
who has been in a wheelchair since 1982.

Remember 1982?  That was back when Michael Jackson released “Thriller” and thrilled us with the moonwalk. We listened to MJ on newfangled little records called CDs. Ronald Reagan was President and we all went to the movie theaters to see “E.T.” phone home. That was a long time ago.

In 1982, I watched the Brewers play in the World Series while waiting for my first child to arrive. In 38 years, PB and I have had four babies which led to four weddings, and eleven grand babies — a whole new generation. Thirty-eight years is a long time.

Maybe the crippled man didn’t hear the question.  It was a “Yes/No” question but he didn’t give Jesus a straight answer. Instead, he wanted to talk about his past 38 miserable years. He had good excuses — no one would help him get into the healing waters, all the other cripples were faster than he was, it was hard lying by the pool every day.

But Jesus didn’t want to hear it.
He told the man to get up, clean up, and go home. 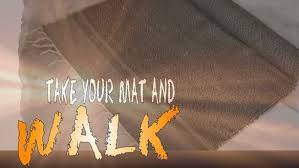 Sometimes Jesus heals people, whether they want it or not.