1. If I live to be 81 years old, I will see six more presidential elections. Lord, have mercy.

2. Inspiration comes from unexpected places. I received a word of encouragement from my daughter’s husband’s mother’s sister’s husband and it was enough to keep me going.

3. Evie is getting a brother in April! It took me a while, but eventually I caught on when I realized everyone was wearing blue one Friday night. The grand score is back to even: boys – 4, girls – 4.

4. If you would have told me five years ago that I would be staying up until midnight cheering on the Chicago Cubs in the seventh game of the World Series, I wouldn’t have believed it. Never say never.

5. On October 4, 1991, I was issued a passport. It expired on October 3, 2001 with no stamps decorating its pages. I am reapplying for a new passport even though I have no plans to go anywhere. My hair looks ridiculous in that ’91 photo.

6. Good gravy is the cornerstone of a successful Thanksgiving dinner. PB grew up with a dad who was a gravy connoisseur, a gravy grandmaster, a gravy guru. So I rolled up my sleeves and roasted, simmered, and whisked. Five hours later, I had a gravy that PB declared “the best I’ve ever tasted”. Grandpa O would have been proud.

7. Hebrews had a word for me this month. “Let us fix our eyes on Jesus, the author and perfecter of our faith.” (Hebrews 12:2) I can’t begin to count how many times I whispered to myself this month, “eyes on Jesus, eyes on Jesus”.

8. There’s nothing cuter than watching a four year old muster up his courage to play the “Pie in the Face” game. Unless it’s watching him get a handful of whipped cream in the nose. I hope the four year old reminded his parents that they both offered him a dollar to stick his adorable face in the line of fire.

9. Convincing middle school boys to dress up like angels for the Christmas program is challenging, even if they are the archangels Michael and Gabriel. I’m scouring Pinterest for manly angel costume ideas. Flaming swords might win them over.

10. Advent is a respite this year. I’m eager to enter into a quieter season. More praying and singing, less talking and wrangling. More candles and music, less TV and Facebook. More glory to God in the highest, more peace on earth, more goodwill. It’s time to treasure up some things and ponder them in our hearts. 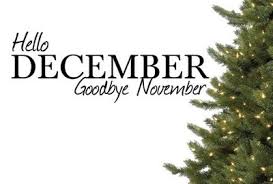 9 thoughts on “10 Things I Learned in November”