In June, I wrote about my son-in-law’s Christmas gift to me — reading four books together in 2016. The first two books were a resounding success so we each made another pick. 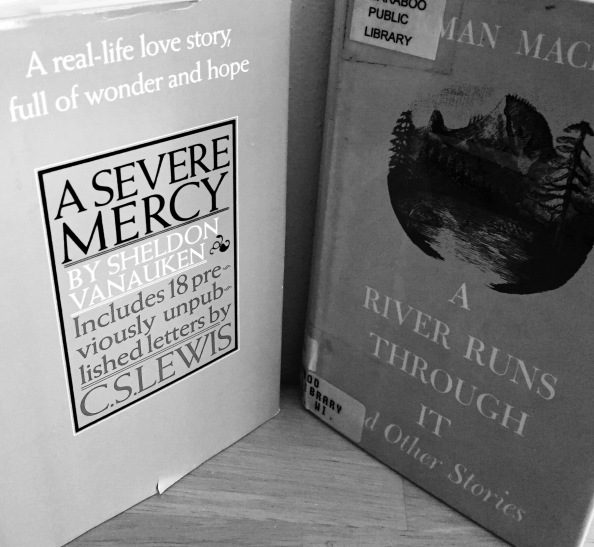 My second choice was “A River Runs Through It” by Norman Maclean. It’s a story about a fly-fishing, Presbyterian minister and his two sons. If you’ve seen the movie, you will picture Brad Pitt standing in the river, casting his line, on every page. But that’s ok. Because the writing is so captivating, even Brad Pitt takes a back seat.

Maclean’s phrases are picturesque: “The storm came on a wild horse and rode over us.” “Then the air disappeared from view.” “We were so dry that we could feel in our ears that we were trying to swallow.”

Some more of my favorite excerpts:

“You can love completely without complete understanding.”

“My father was very sure about certain matters pertaining to the universe. To him, all good things — trout as well as eternal salvation — come by grace and grace comes by art and art does not come easy.”

“As for my father, I never knew whether he believed God was a mathematician but he certainly believed God could count and that only by picking up God’s rhythms were we able to regain power and beauty.”

“It was here that I started this story, although, of course, at the time I did not know that stories of life are often more like rivers than books.”

My son-in-law, Dan, admitted it was tough at first to wade through all the fly-fishing lingo, but when he finished the book, he sent me this text: “Wow. That book deserves another read-through. Man, that last paragraph. The best ending words I have ever read.”

Dan’s second choice was “A Severe Mercy” by Sheldon Vanauken. I’m just a couple chapters in so the jury is still out. Dan and I will talk it over at Thanksgiving.

“Go find yourself a tree, sit down in front of it, look at it long and thoughtfully.” (Eugene Peterson) New year goal: be like a tree. Read more at dinahoverlien.com #asmalldropofink #belikeatree #psalm1 #eugenepetersonquote
Loading Comments...
%d bloggers like this: