My reading this week took me through four solid chapters in 1 Chronicles that consisted of lists of names like Meshelemiah and Zabdiel and Joshbekashah and Happizzez (I kinda like that one). There were lists upon lists of priests, singers, gatekeepers, treasurers, officers and overseers. I thought, “Come on. Really? What’s the point of pages of kooky names from 450 B.C.?”

Perhaps as a reward for muddling through those boring chapters, God saved a treasure for the end of the lists. After naming all the “officials in charge of King David’s property” and recording all the individuals in “the book of the the annals of the King”, there is a pause at the end of chapter 27.

1) Jonathan – (a sensible name) David’s uncle, “a man of insight and a scribe”. David needed an older family member, someone who had known the King when he was just a wee boy and young shepherd. David relied on this man, who had wisdom and knew the scriptures.

2) Jehiel – “took care of the king’s sons”. Not an easy job, as there were at least 19 sons, as recorded in 1 Chronicles 3. Jehiel must have been quite a man to be put in charge of that rowdy crew.

3) Ahithophel – “was the king’s counselor”. We all need counseling.

4) Joab – “the commander of the royal army”. David’s right hand man and confidante.

5) Hushai – “Hushai the Arkite was the king’s friend.” 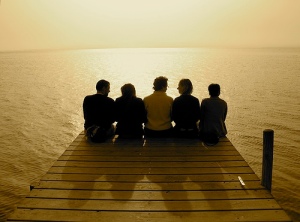